I do realize that grumpiness is a self-fulfilling prophecy. It's better, maybe, when I have to sneak in the writing, squeeze it in between emails and class prep. With this summer grant, anytime I'm not writing, I feel guilty and also entirely unsuccessful in all writing endeavors. I've seriously had some bad rejection this summer. The you-really-can't-write kind. The kind where they call you "creative" or "poetic." Poetry as an adjective is the worst sort of dismissal. Made me so mad I actually wrote some poetic poems which were so bad, they might have even been creative. But there's imperative behind this grant too--if I have some success with this writing, they'll give me another grant. If I don't, they won't. It's worse than tenure. Or as bad as. Carrot. Carrot. I am all yours. And then the stick. All I have are sticks. Not tasty at all.
When I'm not supposed to be writing though, during the semester when I barely have time to at all, all good news is just gravy and bad news is like filling out schedule J of the travel-form. Am I longing for schedule J's? I hope not.

But like I said, I recognize this kvetching is pure privilege and, on a major level, ridiculous. I did get some super nice rejections and some fine kind emails from good people so I have enough will to go on (it only takes like one drop of encouragement for me to extrapolate a lifetime of future hope).

So today, to fix the grouch I
1. got up early. Not really by choice. Erik had to be at work at 6:15. But I couldn't go back to sleep so I put on my shoes and went running. This week, I've been taking the kids to camp and then waiting for the clouds to come to run but the monsoons are taking a break. I knew there would be no cloud-cover. I also knew that all week, waiting to go running is like waiting to finish the paper (i.e. Facebook, which never ends) which means no real work gets done 'til the clouds come. And then it's nearly lunch time. So today, I ran. Then showered. It was hours until lunch (I ate lunch anyway). Then I worked.

2. saw a bald eagle. You can't really plan for this although I do know basically where he lives and, if I really, really needed him, I think I could find him. I saw him on Zoe's birthday in one of his normal spots by the lake but it was nice of him to fly over my house which is not his normal path from mesa to lake. This is what he would have looked like if I had a camera and skill using one: 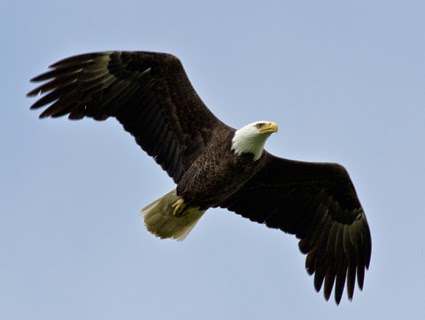 3. sent out a short essay and contemplated sending another one. I'm sitting outside right now. The flies land on me. The biggest wasp I've ever seen thinks my computer is his buddy. I swat and move and walk away but I don't go inside. Glutton for punishment or not, I would rather write outside on the porch than do almost anything.
Posted by Nik at 1:58 PM