Clarksville to Nashville and back again

I went to Tennessee because that is where my book is. The nice people at Zone 3 Press at Austin Peay State University worked hard to get the book out and they sweetly invited me to read. Since neither Erik nor I had been to Nashville, we decided to fly in, drive to Clarksville and then spend the weekend in town. We flew into a tornado with winds that could not compete with Flagstaff winds, but were apparently more spirally. And wind with rain is more intense than wind without. It rained like a downpour in Portland and a monsoon in Flagstaff and a cloudburst in Boston all put together. Double-speed windshield wipers as we drove through the limestone hills of Tennessee. Water poured off the rocks into tiny waterfalls and it has been a dry spring in Arizona so the water seemed like a gift but also a curse because no one goes to readings on tornado days with rain.

We met Barry Kitterman, the fiction prof, and Amy Wright, the nonfiction prof, along with two students for dinner before the reading. Erik and I arrived late and wet but we left dry and happy for the reading. The reading was not entirely without an audience. The audience who was there were attentive and kind and even one person said the reading was brilliant so I really required no other audience. I signed some books and then Erik and I hung out in downtown Clarksville. Downtown Clarksville isn't quite full of nightlife. It's bigger than Flagstaff but, Barry explained, because it's so close the Nashville, everyone goes into the city for dinner and music, draining the town of it's would-be nightlife. The downtown was cute but Barry was right. The bartender was windexing the table next to us at 9:45. She turned the TV off. We left before anyone flickered the lights at us.

So we too, after I went to Amy Wright's poetry class where the students were fun and lovely and smart and I remember that teaching/interacting with humans is better than reading from a book, drained the town of Clarksville of our presence and headed to Nashville. Our hotel (Wyndam resorts. Sales pitch in the morning at 10:30!! We wisely avoided) was by Opryland which is NOT close to downtown but we found our way there and began a three-day tour of tiny bars with lots of music. Some bars were big. Three floors. Three bands. Most of the bars were tiny--split-level galleys that still managed to host two bands between the set of 7 stairs. We stayed at the tiny bars and drank Bud Light since it's hard to drink anything else when you have to drink most of the night and day.

The bands are good. No one was bad. But they all played cover songs almost entirely. They played them well and I get it. The audience wants to sing along. At one bar, a group of women in their seventies who reminded me of my grandma's sisters, sang along to country songs. The covers were not bad. Sunvolt. Old Crow Medicine Show. Garth Brooks. A Carrie Underwood song that made me think I should listen to more Carrie Underwood (I had, before this, listened to zero Carrie Underwood). They played that "Don't call me darlin' darlin'" song a bit much. I heard some song I'd never heard but was obviously a cover about a heartbroken mama which I liked a lot. They covered Jane Says--possibly with a little too much first-had knowledge and Purple Rain--with perhaps a too little purple. Hank Williams. Merle Haggard. Songs we listen to on Outlaw Country on Sirius. But I was surprised how few original songs anyone sang. But band wants the audience to be happy and knowing the words makes an audience happy and a happy audience tips the best. But no wonder no one can break out of there. They move from bar to bar, singing the same covers but who is going to sign someone who sings someone else's songs?

On the one hand, there's something to be said for going home to my regular work and my students and my not stage life. On the other hand, I have another reading on Monday in Tucson and I will be wearing my cowboy boots and maybe do one cover song.

The Next Small-to-Medium Things 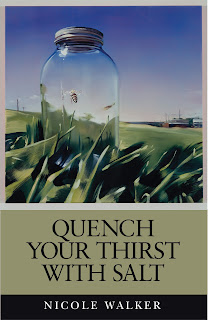 Thanks to Marcia Aldrich at Back Hand Blog and Dr. Write for tagging me to participate in this blog-tagging thing called “The Next Big Thing.” All of the participating writers agree to answer a set of questions in common and then tag five other writers to put forward as the “Next Big Thing.” It’s a way to bring attention to writers in a friendly chain of tags.

I like the idea of this mob blog push. Everywhere I look, there's a next big thing.  There are many things. There are many books. If the books were smaller instead of bigger, more books would fit. My book comes in at 136 pages. That seems small. Maybe medium.

What is the title of your book?
Quench Your Thirst with Salt. The small title is "Quench." Or maybe "Death and Water in Salt Lake" or possibly, "How to leave Salt Lake and come back" but that one gets big again.

What is the one-sentence synopsis of your book?
Granite is hard, bodies are soft; water is soft, bodies are hard; the dominant culture presses down, the subculture pushes up; boys are everywhere, fathers are missing--no wonder the Wasatch Fault is so earthquake prone.

What genre does your book fall under? Essays.

Where did the idea come from for the book?
Growing up in a place where subduing the landscape is as practiced as subduing the people who live there is a hard thing. A person is shaped by that hardness. Is a person as malleable as a mountain? Is she as well-defined as cracks in the granite? Is she as useful as a valley of water pipes? Shaped by the dominant culture and by parents fighting against that subculture, taking the subculture to an extreme, escaping the whole thing, this book is about how I try to stand some ground in a shaky family situation on the dry edge of the Wasatch Fault.

How long did it take you to write the first draft of the manuscript?
Four years. Or maybe twenty.

Who or what inspired you to write this book?
My dad who died and my mom who lived.

Will your book be self-published or represented by an agency?
The book is available now for pre-order at Zone 3 and will be available soon through Small Press Distribution and Amazon.

What other works would you compare this book to within your genre?
I am reading Amy Leach's The Things That Are. It's not much like that but maybe a little. Gretel Ehrlich The Solace of Open Spaces. Steve Almond's Candyfreak--my book is not about candy but is about concrete things that transport you. Terry Tempest Williams. Paul Auster. Nabakov's Speak, Memory. Jeannette Winterson. All her books. Yes. She's the first inspiration. Kathy Acker. Joni Tevis's The Wet Collection. The Orchid Thief by Susan Orlean. Nick Flynn's Another Bullshit Night in Suck City. Ander Monson's Neck Deep and Other Predicaments. Pam Houston's Cowboys Are My Weakness. Steve Fellner's All Screwed Up.

What actors would you choose to play the part of your characters in a movie rendition?
Should James Gandolfini play my dad? Faye Dunaway my mom? I'd have my daughter Zoe play me as a kid but that is too much metaphor even for me. Charlize Theron can play adult me and my sisters to flatter us each, obviate sibling rivalry, and to complete the whole Adaptation/all people are one metaphor. Or maybe sandstone. Sandstone could play me--it is rock but it is  pretty malleable, for a  rock.

What else about your book might pique the reader’s interest?