No, no, that's not what I meant

There are no comments on my last post, and rather than say something not nice, you said nothing at all. Perhaps you're correlating the baby not sleeping with the fact that I feed him sticks and rocks. But no, it's not true. He eats other things. Mainly hummus and bananas. The sticks are just flavoring.
Posted by Nik at 8:16 PM 1 comment:

What I'll Miss Most about Summer

In the late afternoon, Erik and Zoe water our new plants. We have Russian sage, echinacea, holly hocks, daisies, sunflowers, lavender, pentemmons, maguerites, locoweed, blue beard, flag grass and a lot of wildflowers that I can't name. Our neighbors, excited about our interest in plants, divide theirs and send them over. Erik rehabilitated a wind-blown blue beard of theirs. It came over as a stick and now is a full fledged plant.
I take Max's comforter out and plop it on the dirt next to the honey locust tree where Zoe has established fairy land. Mushroom, angels, bunnies, frogs, mermaid and even fairy figurines. I bring a glass of wine and sit on the blanket while Zoe flies the fairies by me and Max. Max likes to eat sticks, pine needles and pine cones. I sometimes let him gnaw on rocks but fear that might be bad for his teeth. Pine cones are deceivingly messy. Almost as bad as teething crackers but I sense they taste a little better. When Max has peeled the bark of the stick, it's time to start cooking dinner. I've learned to grill broccoli so if I'm lucky, I can stay outside longer. Sometimes, grilled broccoli tastes like sticks but it's still better than doing any dishes.
Posted by Nik at 9:34 AM 2 comments:

I think I saw more people yesterday than I saw all summer. This meant no sleep for me. When people talk, I listen and then I fret. No fewer than six people asked me what Kindergarten Zoe was going to. When I told her public school, they turned their faces away. They couldn't look at my shame. Also. One student emailed to say he was sorry he called me by my first name. Also I asked for red wine instead of a martini on a hot day in June. I remembered two of the nineteen names I learned. I ate a sandwich standing up, meaning I ate mayonnaise off my fingers.
I'm not quite ready for school to begin. I need to submerge slowly rather than dive in. One person on Monday. Maybe two on Tuesday. By November I can probably handle the attention of a full class.
In other non sleeping news, Max does not do it. Why sleep when you can pretend to eat all night. He doesn't eat. He nibbles like a bunny rabbit. He falls asleep nibbling but when I dare to suggest he go sleep in some way not attached to me, he wakes up indignant. Like I'm starving him to death. I've started putting him in his crib. This helps 1%. He still wakes up every two hours. I have resorted to saying "no more milk" and "go to sleep" which has the effect, usually, of making him say, oh my god, I would like no more sleep. Perhaps I can have some milk. Advice appreciated, although from what I understand, boys are like this and I may never sleep again. Which means when, in November, I do have the full attention of the class, I will be fully sleeping on my desk.
Posted by Nik at 1:12 PM 4 comments: 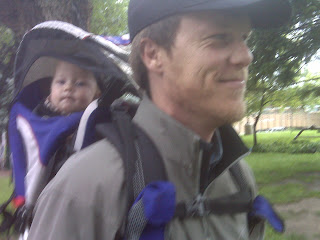 These are probably the worst pictures ever taken but I only had my Blackberry. And it's shaky. And I'd had some beers. 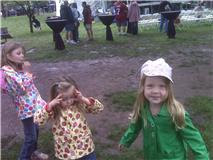 As you can see, it was raining. Did I mention that we live in the Pacific Northwest now? In July, it rained every day. We woke up to rain. We went to bed with rain. Some days, it rained so hard there was rain up to the bottom slat of the siding on the outside of the house. The back patio still has a layer of once-mud.

We went to the beer fest anyway. Last year, they canceled the beer fest because of the economy. The economy we couldn't ignore but the rain we could. It turns out, we don't own an umbrella but we do own hats so we hatted up and headed out. It rained as we walked to the festival and it rained as we deliberated how many tickets to by. Because the economy is still rough, I thought we should go with the bargain--ten bucks for twenty pours. Erik questions my economic path and also how much help I'm going to be with drinking these pours. But I've lived in the Northwest! I know how to do the beer fest. (ooh. rhymey).

It turns out twenty pours is about sixty ounces. That's about three beers each. But there's something about the beer fest that suggests quick drinking. So we drank quickly. The sun came out. Zoe made some friends (a very in-your-face girl that went up under the brim of Zoe's hat and said: "HI. DO YOU WANT TO DANCE?" Zoe recovered eventually and danced in the mud. We drank a little more beer. I don't think I drank my full thirty ounces but, judging from the high quality of the pictures, I might have.
Posted by Nik at 8:17 PM 3 comments:

The crush of days

I don't know what happened between Zoe's birthday, July 16th and now. I do know that my computer is trying to kill me. Or, possibly computers and the internet together. First, Erik's Mac died. I know. Macs never die. And yet? Where is it? At Mac Docs or some Flagstaff knock-off, trying to be resuscitated. Then, four days later, while using Internet Explorer, which is not my browser of choice and therefore, doesn't have all the anti-virus add-ons that I use for Firefox, someone (not to be named) clicked on a website that instantly brought on a virus of death. It was the kind of virus that any time you tried to open an application, a pretend "we'll save your computer with our antiviral software" window appeared. I cried real tears because this is the week the Huffington Post collaboration project goes live. I had nothing to do BUT computer stuff. Email editors, my collaborating friend, artists. I had no back up plan. No Erik computer. Well, I did have my Blackberry, which I do recall crying about for getting for my birthday. I was pregnant and thought I needed no more internet to help me neglect my children. But, apparently, I did! Erik is full of forethought.
So, using my Blackberry and Middlebrow's computer (who promises to blog again, because he and Dr. Write were visiting, I was able to contact my people. And, with their company, I was able to distract myself from all the internet that was passing me by.
On Monday, I got a loaner computer. It took 35 minutes for it to power up. It had no wireless card. It had no Photoshop and no way to open more than one window every six minutes. But, like any good drug substitute, it could access the internet and let me make the first Huff Post response. Yay.
Other internet badness ensued. Both MSN and my university's email system decided to "improve" themselves. Such improvement copied Gmail's "conversation" system, meaning all the emails with the same subject compiled themselves. That's one thing when you're creating the conversations but it's entirely another when it does it after the fact, all the emails whose subject read "grad question" or "thank you" were compiled into one conversation. Only the latest email was replyable to. The internet has driven me to use the word replyable. It also makes me end sentences in prepositions.
On top of the technological difficulties, Mr. Max has employed his own technical difficulties. At night, he seems to think that having a nipple in his mouth is the same thing as sleeping. While fine for him, for me, nippling and sleeping are opposite activities. I blame Erik because months ago, he frowned on giving Max a binky. Now, when certain babies need binkies most, it turns out I'm the binky. I'm working on a technological fix that will allow Erik to be the binky.

The good news is, in between all the business and disaster, I was able to make Zoe's birthday dinner, put up some peaches from our friend's peach tree, and make the best pork chops ever. Perhaps, if my children will let me ignore them further (Zoe is joining me in complaining that Tiffany, not Kevin, should have won Top Chef and Max is surfing on his stomach on his boppy pillow), I will post the recipes at NVP.

I also plan on posting all the stuff that I have to do now that, I gather from the way I'm getting emails in my now-mostly-unusable university email, summer is mostly over (sorry Hightouch. I have been following your plan to not mention summer's demise until it's really over but I couldn't help it.)

Edited to add: I forgot the biggest crush. My laptop had a hairline fracture in the screen. Annoying but hair-like and entirely see-through-able. After it went in to the University computer doctors, it came back with green, ugly splotches where the crack was. This computer is not long for this world. We pray that we need not bury both the Mac and this Dell Latitude together in the backyard. What would the children do with all our attention?
Posted by Nik at 4:28 PM 3 comments: