1. Last week's badness didn't take place in a vacuum of solipsistic blogginess. Plane shot down in Ukraine, Palestine and Israel, immigrating kids overwhelming detention centers. Take a stand, people say on Facebook. And then they yell at you on Facebook when you say anything. I guess thick-skin is a requirement for internet tanglings but I should quit the Facebook. If I think of one thing in my life that has made me grumpier in the past five years, it's Facebook. Or that five years have passed. One or the other but I suppose Facebook is about as easy to quit as time. As for Palestine/Israel, I would join up with the Jews for Peace but I don't think they will take me.
I'm thinking of those kids in detention centers. Some as young as ten. The comparison to the US turning around the ship carrying Jewish-child refugees in 1939 rings particularly true. Zoe and Max wondered why so many kids wanted to leave Mexico and other places in Latin America. I told them how some of the kids were being forced into working for the drug cartels and if they said no, the cartels sometimes killed them.  Max asked how old some of the kids were. I said I don't know, maybe 8. Maybe even 5. "Do they want to go home?" I said, "I'm sure they miss their mamas." "But then they'll die if they go home." And I said, "Maybe." What can I do to help? Take them Spanish-language books?

2. In a less depressing conversation that reminds me of how, even when the bad world continues all around you, one goes on, Max said, "I'm going to be a bad teenager when I'm a teenager. You don't have to be so afraid. I'll just be bad." It's nice that he doesn't want me to worry.

3. We rode our bikes to the Celtic festival, which was a festival less than awesome. What's with charging a million dollars to get into a festival so they can charge you more millions for a kidney pie and some a thimble full of mead. It was some cross between a Renaissance Festival and bagpipe convention. The steak and mushroom pie (which had no kidneys) was pretty good, but not $7 good. The mead should have come with a stick of insulin. But the hurling and the caber tossing and the other throwing thing was pretty awesome. 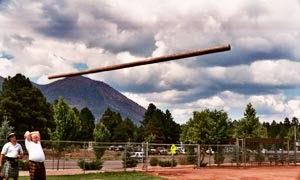 I stole this picture from the Arizona Highland Celtic Festival website. The best thing was, riding my bike, then walking Max and Z over to Okim's for a playdate meant I did not drive my car today.

4. (A bonus to make up for hand-wringing number one.) I'm right now eating two kinds of cherries. The regular Bing which were 99 cents a pound and the expensive Rainier, which were 3 dollars and 98 cents a pound. The Rainier are better but they are not $3/lb better.
Posted by Nik at 4:31 PM