It has been fun. Too fun. Now that school is out and the book-release-in-Tucson-and-Flagstaff kerfuffle  is dying down, I'm all antsy and excitable. I knew the fun times would be addictive. In Tucson, I got to do all of my favorite things: stay up late talking with my good friends, drink wine by their pool, get dressed up, go to dinner, watch everyone else drink Manhattans, read, answer questions with my new BFF Brent Hendricks (check out his amazing book A Long Day at the End of the World--about bodies, including his own father's, not cremated at the Georgia crematorium). Brent and I were asked questions after our reading like how do sex and death relate and how does the desecration of nature act itself out on the body? Brent answered in French, saving me. We also attended Ander Monson's class where Brent reminded me that all good writing comes from obsession. There are some moments in my life where I felt like a rock star/princess. This was one of them.
However, when I came back I realized how neglectful I have been when I host readings. I do think the writers I bring feel well-attended to, but I don't do enough to get audience attendance. It's hard to compare Tucson where they have the Poetry Center and an audience will come out even on a Monday night during the busiest time of the semester to hear someone read to Flagstaff where we have our readings on campus, in our Liberal Arts building which is tucked inside campus deep and there is no real tradition of a reading series. That said, I came back from Tucson doubly determined to make sure more than 12 people show up at Michael Martone's reading tomorrow night. I emailed everyone I knew in Marketing, at KNAU, at the local paper. They all responded with great ideas and helped spread the word and my chair bought a KNAU day-sponsorship and my colleagues sponsored scholarships for students to take the workshop and Seth Muller at the paper interviewed Michael and I hope beyond hope people come out for the reading because I want Michael to feel like a rock star/princess too. 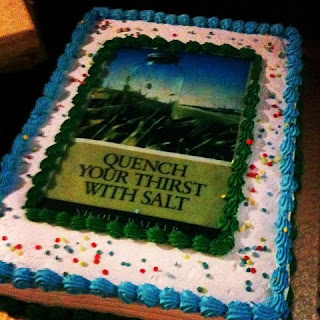 When I returned from Tucson, I thought the rock star/princess times were over for me but then they were not. My friends at work through me a book release party that involved cake decorated as the cover of the book. They bought flowers. My students brought more flowers. People bought the book. 30 copies. All I had. The best part is, people seem to be reading the book. My son's day care teacher bought two copies--one for her daughter, one for herself. They're both reading it. I warned her it was kind of dark. She said, my daughter loves dark. When I picked Max up the next day, she said she was up all night reading the book. She loved the connections between childhood and places, or sex and death, as Brent Hendricks would put it, in French. Her daughter had already finished it. One of my friends texted me, "I was knocked by your words!" and another friend wrote "I love the strange connections. And how, now that you've made those connections for me, they are no longer strange, but magical and certain." It would be nice and all to get some press reviews but really, these four people, along with my mom who read it with such great generosity, are enough to make me feel not like a rock star/princess but like I have not wasted my life writing. And there was cake!

Now if only the Martone reading is full-to-the-brim, and he leaves Flagstaff feeling like a rock star/princess, I will consider the Taurus term of 2013 to be a success!
Posted by Nik at 1:04 PM 3 comments: