I like Halloween. It used to be my favorite holiday. Now, it's more complicated what with the  having to do more than go to someone's house with a bottle of wine and call it an October. Now, the party is last on the list. Now, I think of costumes for the kids in September. Now, I time the ordering of pizza so we can do both the downtown and the trick-or-treating. Flagstaff has an awesome downtown Halloween with a scary house and games and booths in the square. Everyone dresses up. Even the grown ups. This year, I had to teach until 5:30. We got out a little early (my students took pity on my kids and talked very fast). I went downtown with my wings and my Give a Hoot, Don't Pollute slogan. 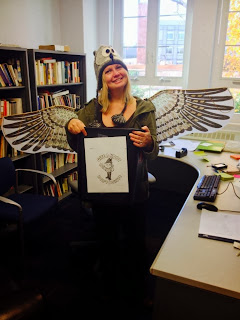 My wings were too big. I kept stabbing people in the eye.  I gave up on trying to follow Max and Zoe through downtown, left them to Erik and their grandparents and went to pick up pizzas. Our friends were meeting us at the grandparents' house for pizza (and wine. Don't feel too sorry for me) and then to trick-or-treat in their neighborhood where the candy is plentiful and the sidewalks extant.
I did not make it to the Halloween party at my friend's house. I have mostly reconciled myself to the idea that Halloween is for kids. There once was a little Halloween. Now there is a lot. Maybe too much. Cleo the dog ate half of Max's candy. Zoe, zombie-bride, was a little too scary. And a bit nonchalant about her scariness. 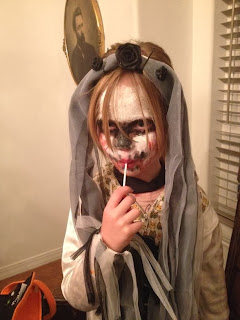 Speaking of zombies. Once upon a time I could not watch the Walking Dead. I had seen the I Am Legend and the dog scene.  I had a nightmare every time I saw a zombie on TV. But then, after the Boston AWP, I sat on a seat behind and to the left of someone watching the Walking Dead. I could see the show clearly across the aisle. He must have watched 7 episodes, from the series' beginning. I had watched the first episode with Erik, which was when I quit the Walking Dead. The mother coming up to the door, looking through the peep hole, was the source of the most recent zombie nightmare. But with the sound off, the zombies looked pretty unscary. When I got home, there was a Walking Dead marathon. I caught up.
Now I watch it every week. I watched it last night. I still have nightmares, or, rather, dreams. They're not so scary. Zombies biting my knees. A cure for zombie-ism. Zombies lining up to get a shot, complaining about the sting. I try not to think about the show before I go to sleep but I have questions. What do the zombies represent? Xenophobia? Contagion? Racism? Republicans? My mother-in-law suggested immortality. Also, do you always turn into a zombie if the zombies eat you? Like, if they eat all your entrails, do you have enough "stuffing" to walk around? How come most of the zombies seem whole? Do zombies have any memory? They can smell alive people? What about covering themselves in blood, like Rick did. Would that work? I liked the World War Z solution to the zombie problem. What solution will the Walking Dead people have? Maybe the swine flu will save them.
We keep talking about getting rid of cable but then we'd have to wait to see all the Walking Dead and that seems like an unlikely patience. But I changed my mind about zombies like I changed my mind about must-go-to Halloween parties. Maybe I can do it again.
Posted by Nik at 8:13 AM 4 comments: